Cob Crate? Sounds lame. What the heck is it?

COB CRATE! (such an awesomeness deserves ALL CAPS and an exclamation point), is an incredibly cool new promotion being offered by Con on the Cob, the universe’s most off the cob celebration of games, art, freaks, and fun! 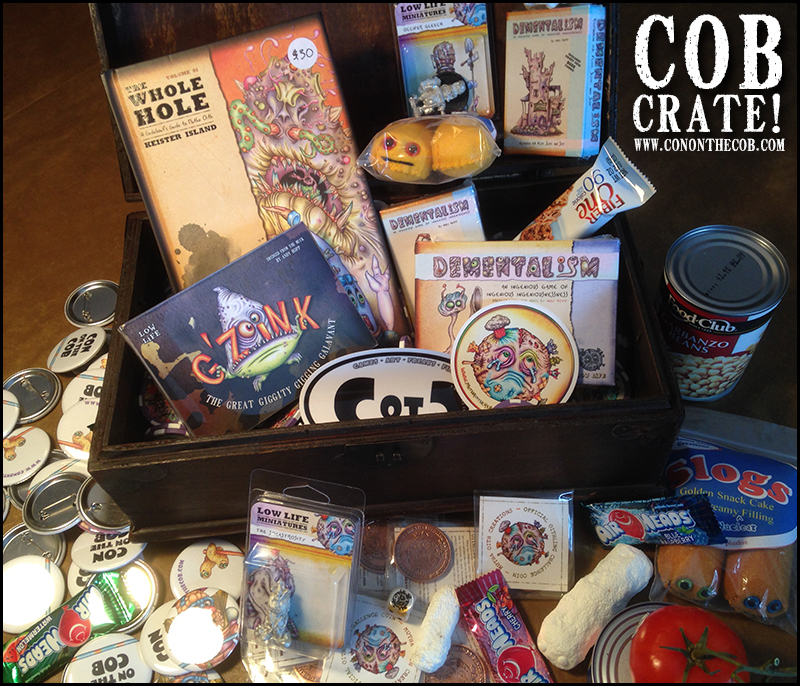 Think of it as an overflowing cornucopia of really cool things you can get FOR FREE from Con on the Cob. If you do what’s right, there will be one waiting for you when you get to Con on the Cob in November…

Of course there’s a catch. There’s always a catch. Happily, in this instance, the catch isn’t something bad. It’s just a little motivation to do something you already planned on doing, but doing it a little earlier than your procrastinating wazoo would normally be inclined to do it.

Every year before Con on the Cob I post numerous messages and send out buttloads of emails and whine and nag and beg you guys to reserve your hotel room early. See, the cost of the venue is directly tied to how many hotel rooms are rented. The sooner we rent those rooms the happier the hotel is and the less stress we have worrying about if we’ll reach our quota or not.

That is why EVERYONE who registers for a con badge and reserves a hotel room at Days Inn in Richfield, Ohio for Con on the Cob BEFORE July 1, 2018 will nab one. It’s our thank you to you for doing us a solid.

Keep in mind, you DON’T actually have to pay for your hotel room by July, just reserve the room. They won’t actually charge the full amount until arrival!

It’s very important that you call the hotel directly (330-659-6151) and tell them you are with Con on the Cob. Do not register online because it will be a lot more expensive, we won’t get credit for it, and you won’t earn a COB CRATE!

What kind of stuff will be in it?

That picture up there shows a small sampling of the sorts of things that are likely to inhabit a COB CRATE! Obviously, not all of that stuff will be included, and there are a lot of other things that will probably be in there. Here, in the form of a bulleted list, are some things that MIGHT be in your COB CRATE! Each one is different and each one will include AT LEAST five things.

I notice a whole lot of Low Life stuff in that picture. I really dig Low Life, of course, but will there be other stuff too?

Of course there will. Low Life stuff is just what I have on hand at the moment. An abundance of jazz will be had! Last year’s Cob Crates contained roughly $100 worth of games and other products donated by Alliance Game Distribution, Impressions, our super cool Con on the Cob vendors and artists, and many others.

You are correct! This is the coolest thing to ever happen anywhere ever! I’m done procrastinating! In fact, I’m already on the phone with the Days Inn reserving my room!

Yay! Don’t forget to nab your con badge while you’re at it…